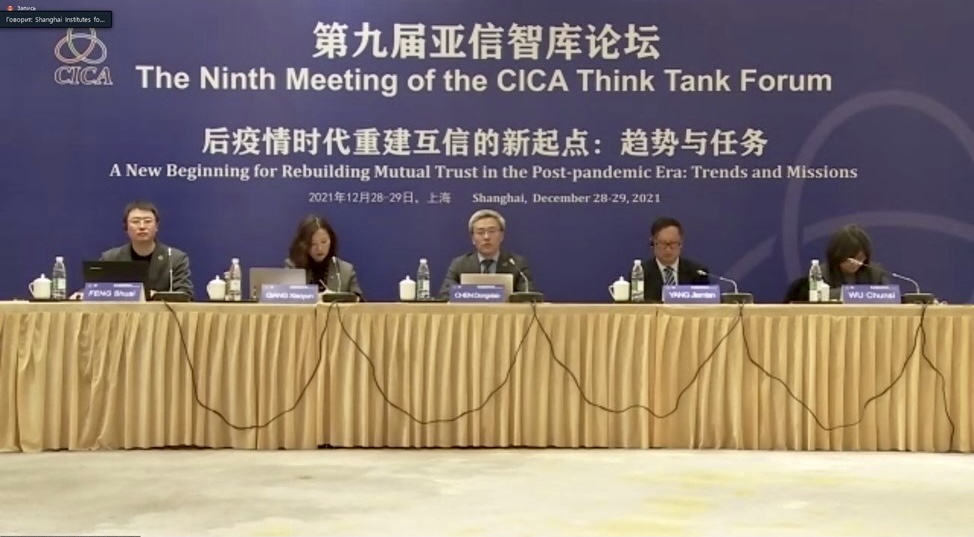 On 28-29 December 2021, the Think Tank Forum of the Conference on Interaction and Confidence Building Measures in Asia held its Ninth meeting in the format of a videoconference that was chaired by the Shanghai Institutes for International Studies (SIIS). It was the first meeting of the TTF as a permanent advisory body of CICA. The meeting was attended by heads and experts from leading think tanks and research institutes of CICA Member States.

The participants were welcomed by CICA Executive Director Ambassador Kairat Sarybay, Ambassador Xiao Qinghua of the Eurasia and Central Asia Department of the Ministry of Foreign Affairs of the PRC, and Professor Chen Dongxiao, President of SIIS.

The meeting resulted in an extensive exchange of views on the relevant items of the Forum’s agenda:

- Security challenges to CICA Member States in the post-pandemic era;

- Cooperation among CICA Member States on security in the digital era;

- Views of CICA Think Tanks on transformation and upgrade of CICA.

In his welcoming remarks, CICA Executive Director Ambassador K.Sarybay noted that the initiative of President of Kazakhstan Kassym-Jomart Tokayev to transform the TTF into a permanent body of CICA had been implemented by CICA Member States in October 2021 by bringing leading think tanks and research institutes of the Member States together.

The Executive Director thanked the People's Republic of China, and in particular, the Shanghai Institutes for International Studies for its contribution to the development of the CICA Think Tank Forum. From 2014 to 2020, the Shanghai Institutes held 8 round tables, resulted in the discussion of the most pressing issues and challenges in the CICA area, that were attended by leading experts from the region.

K.Sarybay underscored that today Asia continues to face an unprecedented number of security challenges and threats. On top of traditional threats, the new challenges are emerging and their nature is changing. The pandemic has seriously impacted the social and economic welfare of countries around the world and has further exposed the existing vulnerabilities. Other global problems such as climate change, demographic imbalances, socio-economic and technological gaps between countries in the world exacerbate the already complicated security environment.

CICA, on its part, makes a valuable contribution to building peace and security in Asia through its well-developed tools. At the same time, CICA’s unique capabilities and potential could further be expanded so that it could play a more meaningful role in solving problems and challenges in the Asian security system in the future by implementing a step by step transformation of the Forum into an organization and preserving its unique attributes.

During Session 1, the participants exchanged their views on regional security in times of the COVID-19 pandemic, and expressed their proposals on implementation of specific measures aimed at building confidence in the security area. In their presentations, speakers noted an important role of CICA in the system of international relations and its contribution to stability and security in Asia, and emphasized the need to continue the existing interaction in the priority area of “Epidemiological safety, public health and pharmaceuticals”.

During Session 2, the experts considered the potential for sustainable development in the context of a new scientific and technological revolution. The speakers noted that the majority of the CICA Member States are developing countries with an uncertain future in terms of economic development, given the influence of the digital economy and the new scientific and technological revolution. In this regard, the experts made a number of proposals with regard to potential areas of cooperation among the CICA Member States on cybersecurity, development of innovations and digital economy, and sustainable supply chains.

During the discussion on “Conceptual approaches to the transformation of CICA into a full-fledged international organization for regional security” the CICA Think Tanks’ heads and leading experts noted the need for capacity building of CICA and its further institutionalization.

The participants agreed that CICA as a fully-fledged international organization for regional security would become a more effective vehicle for the practical implementation of its principles and achievement of its objectives, expand opportunities for strengthening mutual trust and cooperation, consolidate the Member States’ contribution, and strengthen the role of Asian states in the global security architecture.

In conclusion of the event, Professor Chen Dongxiao, President of SIIS, thanked the participants of the Ninth CICA Think Tank Forum and expressed his willingness to further deepen cooperation on research and analytical support.

Based on the outcome of the event, the TTF Members should adopt joint recommendations and, under the leadership of SIIS, will start developing an annual Action Plan for 2022 that should consolidate activities of CICA on information and analytical support, meetings and round tables, joint research activities, experience exchanges and etc. 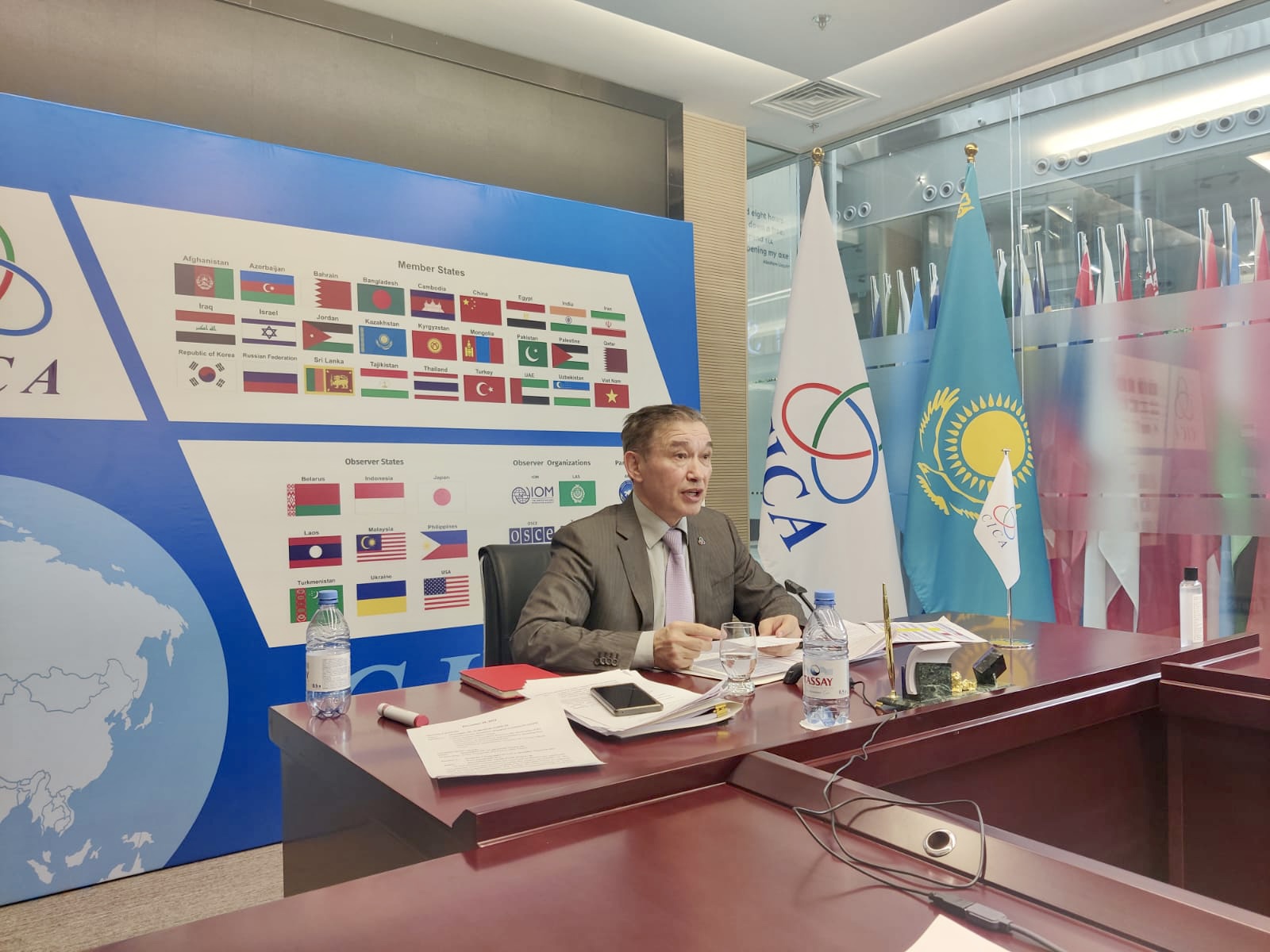 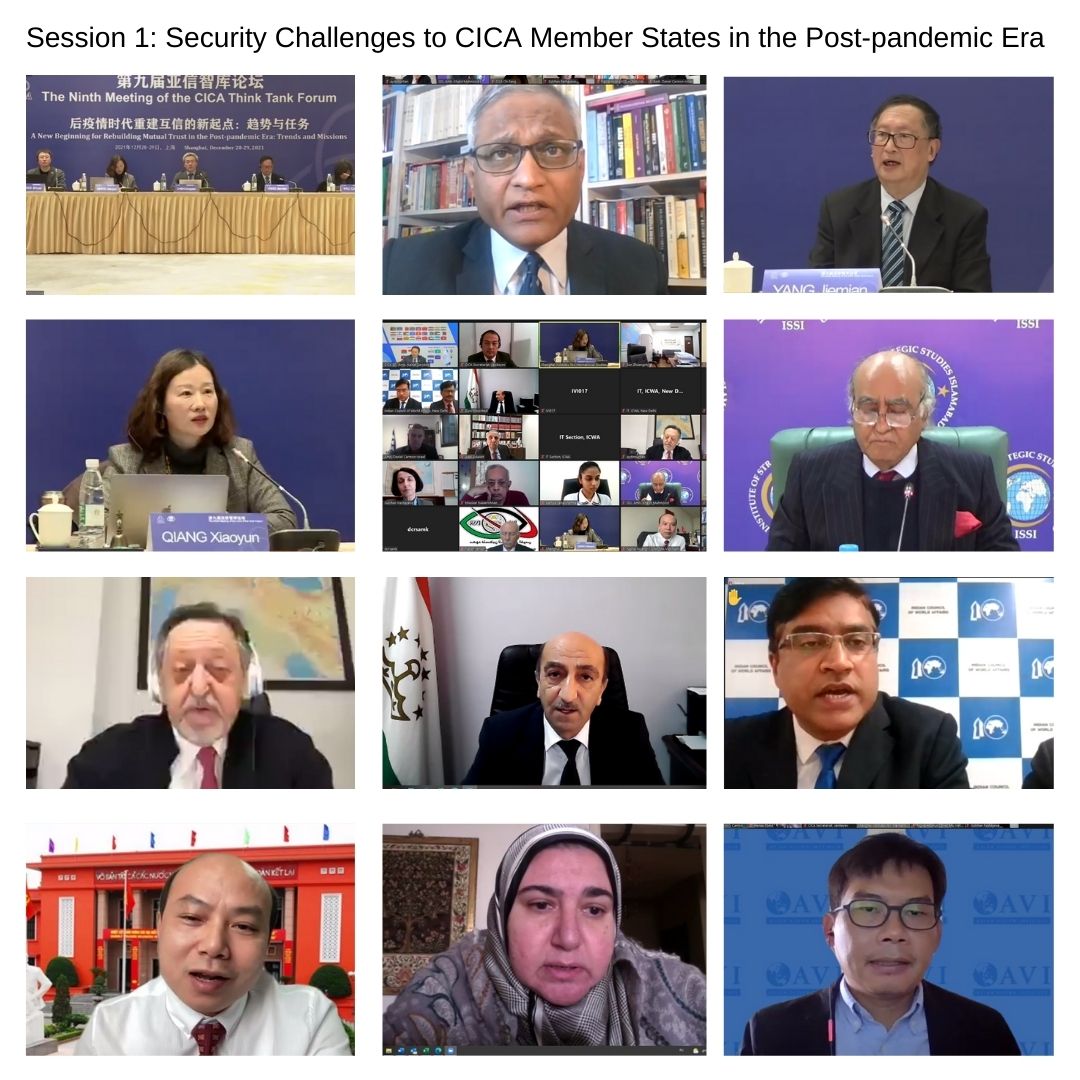