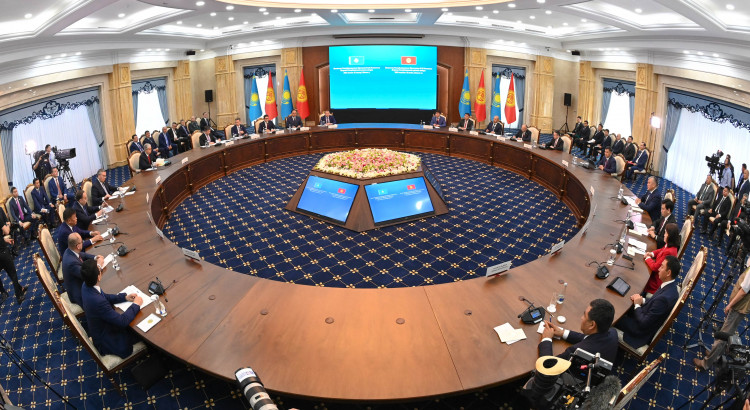 The transformation of the Conference on Interaction and Confidence Building Measures in Asia (CICA) into a full-fledged international organization is gaining increasing support at the highest levels. This was evidenced during the official visit of CICA Chair, President of the Republic of Kazakhstan Kassym-Jomart Tokayev to Bishkek on 26 May 2022, as Presidents Kassym-Jomart Tokayev and Sadyr Zhaparov signed a joint statement aimed at enhancing the partnership between the two countries and coordinating actions at the international level. In particular, the signed document reflects the support for the initiative of the Republic of Kazakhstan to transform the Conference into a full-fledged organization for cooperation in Asia.

Moreover, President of Kyrgyzstan Sadyr Zhaparov accepted with gratitude the invitation of President of Kazakhstan Kassym-Jomart Tokayev to participate in the Sixth CICA Summit to be held on 12-13 October 2022 in Nur-Sultan.

It should be noted that Kyrgyzstan plays a significant role in promoting the CICA process and supports its institutional development. Kyrgyzstan is a co-coordinator of the human dimension and actively participates in the implementation of confidence building measures, as well as in the work of the advisory bodies of CICA, in particular, the Think Tank Forum (TTF) and the Youth Council. For example, in July 2016, Bishkek hosted the Second Conference of the CICA Youth Council.

The initiative to transform the Conference into a full-fledged international organization is the strategic goal of Kazakhstan’s Chairmanship in CICA. The Republic of Kazakhstan is making consistent efforts to harmonize the positions of the Member States to launch a gradual transformation process at the forthcoming Sixth CICA Summit.