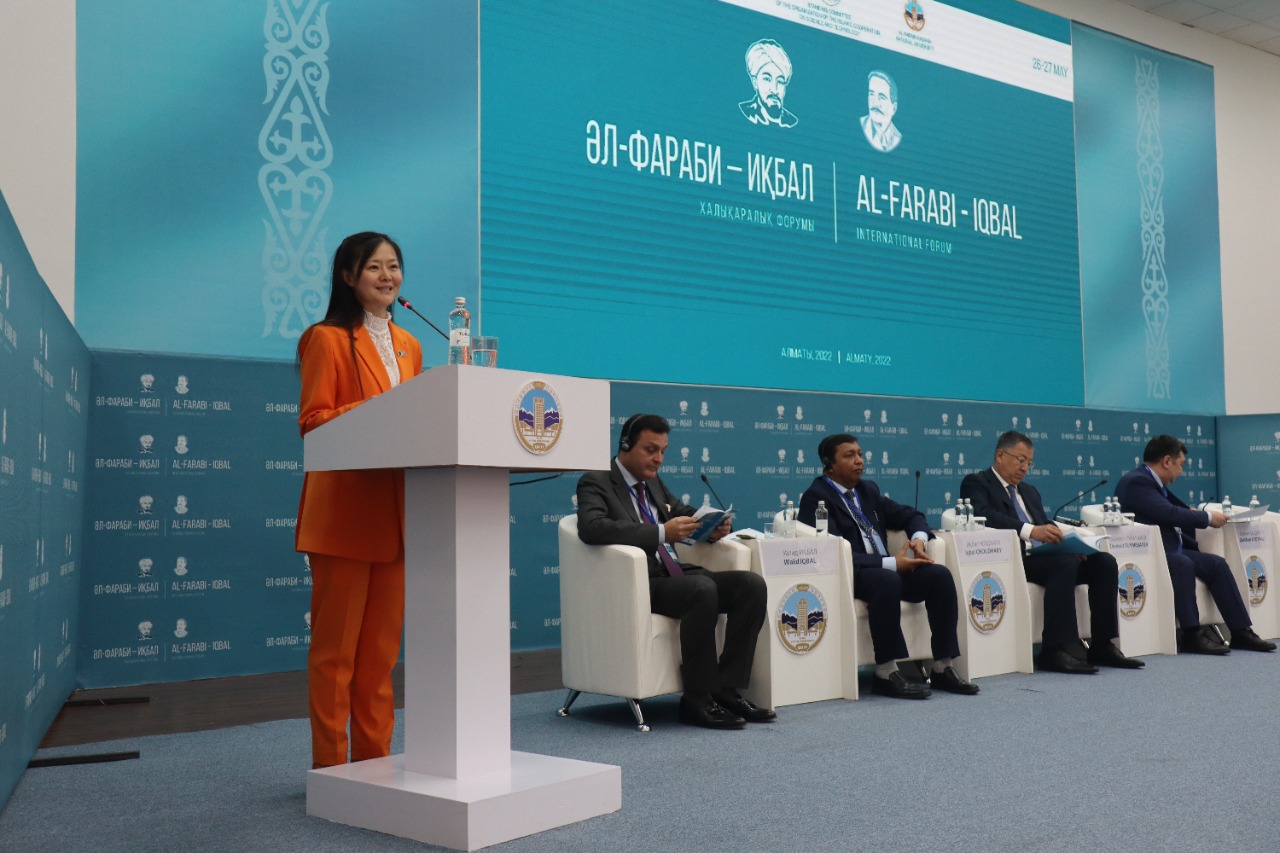 First of all, I would like to thank the organizers for the opportunity to be a part of such an important event, which brought together a very distinguished composition of participants. I hope that the results of our joint work will have a beneficial effect on strengthening intercultural and interpersonal ties, which is one of the priorities of the Conference on Interaction and Confidence Building Measures in Asia, which I represent.

Today's event is held within the walls of one of the largest universities in Kazakhstan – KazNU, gloriously bearing the name of the “Great Son of the Great Steppe” – Al-Farabi, a man who made a significant contribution to the development of sciences and culture of the peoples of Asia and Europe. In turn, outstanding philosopher – Spiritual Father of Pakistan, Allama Muhammad Iqbal, noted in one of his sayings, “Only one unity is dependable, and that unity is the brotherhood of man, which is above race, nationality, colour, or language.” The meaning and wisdom of these lines are still relevant for us today.

The agenda of the Forum covers a very wide range of issues from intercivilizational, intercultural, interfaith dialogue to practical cooperation in the fields of energy, food security, sustainable development and information technology. Indeed, these issues attract the increased attention of the international community, including in various multilateral formats of interaction. And CICA is no exception.

I am pleased to inform you that this year CICA celebrates its 30th anniversary. The very initiative to convene the Conference was announced in 1992 from the high rostrum of the 47th UN General Assembly by the First President of Kazakhstan, Nursultan Nazarbayev, and its establishment and subsequent evolution largely became a response to the need of many Asian states for new forms of interaction and cooperation. You probably remember the tectonic shifts in the geopolitical system happening at that time.

It is safe to say that CICA has since proven to be an effective international forum for confidence building and cooperation aimed at ensuring peace, stability and prosperity in Asia, taking its proper place in the matrix of multilateral cooperation in this region.

Today, CICA is the largest intergovernmental forum in Asia, uniting 27 countries and covering 90% of the continent with a population of more than 3 billion people. Nine states and a number of international organizations have CICA observer status, including TurkPA. Memoranda of cooperation have been signed with the SCO, the SCO RATS, ECO, the UN Office on Drugs and Crime, and the Assembly of People of Kazakhstan. Work is underway to further expand the CICA partnership network.

It is important to emphasize that CICA unites countries with a very diverse political, socio-cultural and historical profile, therefore, the Member States pay increased attention to the search for mutually beneficial areas of common interest, focusing on a positive agenda. We are talking, primarily, about projects in the areas of small and medium enterprises, connectivity, smart agriculture, transportation, trade, sustainable development, and youth policy. People-to-people contacts play a major role in confidence building.

In fact, CICA’s day-to-day activities are based on a unique document in the history of multilateral diplomacy on the Asian continent, the CICA Catalogue of Confidence Building Measures, which provides the Member States with the outlines of comprehensive interaction in five dimensions: economic, environmental, human, military-political, as well as new challenges and threats.

This activity has shown a positive momentum in recent years. This is largely due to the efforts of Kazakhstan, who chaired CICA in 2020-2022, and the considerable support of the Member States. A key event this year will be the Sixth CICA Summit to be held in October in Nur-Sultan. We are also planning to hold the sessions of the CICA Business Council and Business Forum in June, the Youth Council and Think Tank Forum in July, the Finance Summit in November, and a number of other sectoral events.

The upcoming meeting of the leaders is designed to give serious political impetus to the further development of CICA and its gradual transformation into an international organization for interaction and cooperation in Asia, which will certainly contribute to strengthening the role of the region in world affairs and leveling up cooperation between the CICA Member States.

Allow me to briefly highlight the activity of CICA on certain issues covered by this conference.

Food security and smart agriculture have recently garnered considerable interest. In 2021, we hosted three training seminars on Smart Agriculture Application and Development, during which Chinese agricultural scientists shared cutting-edge developments in this domain, including the use of digital and satellite technology. Kazakhstan held a conference on food security, during which the Member States analyzed factors and ways to reduce the risk of food crises.

Sustainable development in its various manifestations is discussed in the context of business processes and development of small and medium enterprises, financial cooperation, development of green technology and renewable energy, effective solutions for waste recycling and disposal, and low-carbon urbanization.

Naturally, much of CICA's work is devoted to digitalization and the multi-disciplinary implementation of information technology, its role in modern education, post-covid recovery, and improving the quality of life. Dialogue on the security of and in the use of such technology is also one of the priority issues on the CICA agenda.

I would like to conclude by emphasizing that such international forums have a strong added value in terms of strengthening dialogue on pertinent issues of cooperation and interaction for the benefit of all our countries. I would like to wish the participants of the Al-Farabi and Iqbal Forum fruitful and successful discussions.

Thank you for your attention.