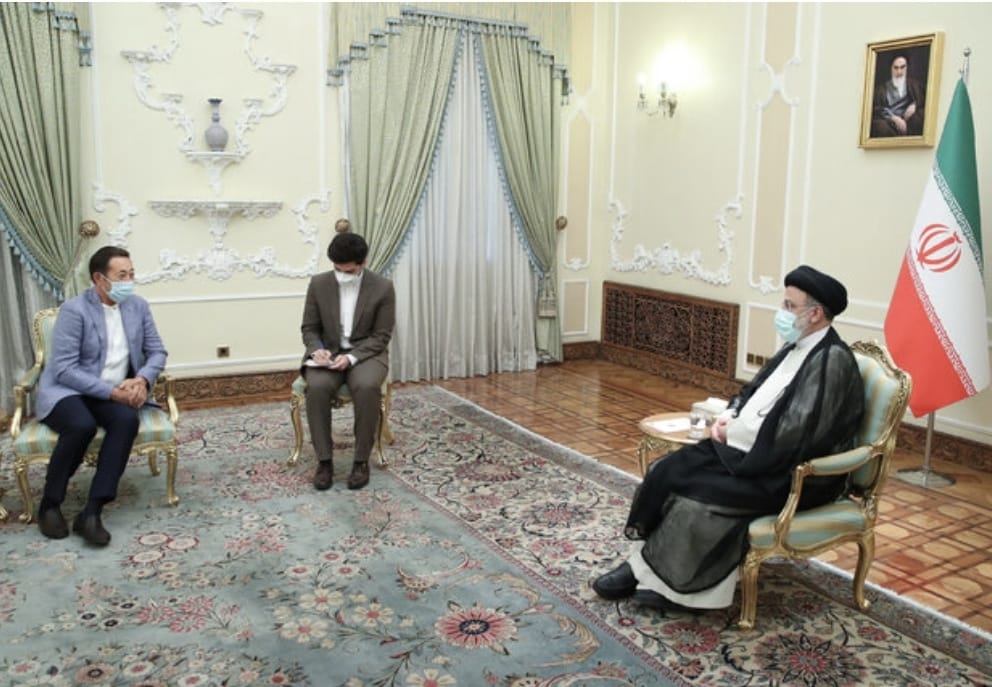 At the invitation of the Government of the Islamic Republic Iran, CICA Executive Director Ambassador Kairat Sarybay participated at the inauguration ceremony of new President of the Islamic Republic Iran H.E. Seyed Ebrahim Raisi. During the visit to Tehran on 4-5 August the Executive Director was received by President-Elect Raisi and had a meeting with Speaker of the Iranian Parliament Mohammad Bagher Ghalibaf.

At the meeting with President Raisi, Executive Director Sarybay thanked Iran for continuous support to CICA and expressed confidence that under new leadership Iran will further strengthen its contribution to global and regional peace and security. The Executive Director noted the crucial role of Asia in international affairs and the need to create Asia’s own network of cooperation. In that context, Ambassador Sarybay informed President Raisi about the objectives of the CICA Chairmanship of Kazakhstan for the CICA Ministerial Meeting in 2021 and CICA Summit in 2022, highlighting the need to take systemic actions and move CICA forward through transforming it into an international organization. The Executive Director expressed gratitude to Foreign Minister Javad Zarif for valuable contribution to strengthening dialogue and cooperation in Asia.

President Raisi stressed his support to cooperation with international partners of Iran and the importance of regional fora, such as CICA. He noted the important role of Secretariats of intergovernmental organizations, including CICA, in promoting cooperation between governments and in decision-making processes of their Member States. “CICA should pursue an active agenda and materialize cooperation between its governments”, said President Raisi, and emphasized the need for further strengthening and “activization of the CICA forum”. He noted Iran’s active contribution to CICA cornerstone activities and pledged stronger support by Iran to achieving objectives of CICA and more active contribution of Iran to broader areas of cooperation in Asia.

At the meeting with Speaker of Parliament Ghalibaf, the CICA Executive Director stressed the importance of Iran for security and cooperation in the CICA area and beyond. Ambassador Sarybay expressed appreciation for active role played by Iran in CICA and stated that he looked forward to working with the new government of Iran. The Executive Director noted that peace and security cannot be achieved unilaterally and that CICA provides its Member States a platform for dialogue and interaction. In that context, Ambassador Sarybay underlined the importance of the power of multilateralism and inclusiveness, which will bring Asian nations to a better place by helping them to co-operate with each other and decide by themselves on their future.

Speaker of Parliament of Iran Ghalibaf stressed that peace and security are of paramount importance for all countries, including Iran, and that Asia in the 21st century is one of the drivers of peace, security and economic development in the world. Dr. Galibaf noted that unilateral actions by some countries cannot bring any solution in addressing challenges to security, such as terrorism, drug trafficking or other threats. The Speaker of the Iranian Parliament expressed hope that CICA will bring about genuine peace and security to Asia.

During the visit to Tehran CICA Executive Director Sarybay met with Secretary General of the Economic Cooperation Organization (ECO) Hadi Soleimanpour and held a productive and detailed exchange of views with his colleague on synergies and areas of possible practical cooperation between CICA and ECO.

Ambassador Sarybay updated the ECO Secretary General on current CICA developments and objectives, including the CICA Chairmanship’s priority to turn CICA into a full-fledged organization and further institutional strengthening of CICA and its Secretariat. The CICA Executive Director suggested practical ways and concrete areas for possible substantive interaction between CICA and ECO, such as strengthening connectivity in Asia through a holistic approach, using the advantage of similarity of objectives and overlap of geographic areas of CICA and ECO, broad membership and comprehensive agenda of CICA, and rich ECO expertise in economic dimension. As an example, Ambassador Sarybay noted the possibility of practical interaction and combination of efforts of specialized institutions of CICA and ECO with similar mandates through participation at each other’s fora or events.

The ECO Secretary General stressed that ECO and CICA have almost the same objectives and could find practical ways of mutual support in moving towards the same goals. Dr. Soleimanpour noted the importance of creating and accumulating regional wealth and fostering economic growth of Asian nations and, in that context, the need to consolidate efforts of regional organizations in global competition for capital and investments. The ECO Secretary General noted that ECO and CICA could enhance cooperation through a mutual observer status, direct access to each others’ activities and events, and practical steps for the benefit of respective regions or subregions, such as developing national regulations and rules in specific common areas of interest of Member States.