Prospects for cooperation in the areas of digitalization of business processes of small and medium enterprises and the ways to ensure food security were discussed by participants of the Fifth Plenary Session of the Business Council and the Seventh CICA Business Forum, held on 27 June 2022 in Nur-Sultan, organized by the National Chamber of Entrepreneurs of Kazakhstan “Atameken” and the CICA Secretariat with the support of the Astana International Financial Centre.

More than 150 participants from Azerbaijan, Bahrain, Bangladesh, Cambodia, China, Jordan, India, Iran, Israel, Kazakhstan, Kyrgyzstan, Palestine, Qatar, Russia and Türkiye took part in the CICA events held on the sidelines of the Astana Finance Days, including representatives of departments responsible for implementing the economic policy of Member States in the field of small and medium enterprises, heads of business communities and diplomatic missions, as well as experts from international organizations and professionals in the field of digitalization of business processes in tourism, agriculture, transport and logistics.

The session of the Business Council was opened by Chairman of the Board of the CICA Business Council, Chairman of the Presidium of the National Chamber of Entrepreneurs of Kazakhstan Raimbek Batalov, who noted that cooperation of the CICA Member States in the field of digitalization of business processes, as well as in ensuring food security met the interests of the Asian continent.

First Deputy Minister of Foreign Affairs of the Republic of Kazakhstan Akan Rakhmetullin addressed the participants of the events with a video message, emphasizing the importance of the practical implementation of confidence building measures within the forum. He informed about the intention of Kazakhstan, CICA Chair, to launch the process of transformation of CICA into a full-fledged organization for interaction and cooperation in Asia at the Sixth CICA Summit to be held in October 2022 in the capital of Kazakhstan.

Governor of the Astana International Financial Centre Kairat Kelimbetov, spoke about the activities of the AIFC – regional financial hub, as well as the capabilities of TechHub and the Affiliated Center of the Fourth Industrial Revolution, created jointly with the World Economic Forum.

Among the key note speakers of the Plenary Session were Minister of National Economy Alibek Kuantyrov and Deputy Chairman of the Reform Council under the President of Kazakhstan Sir Suma Chakrabarti.

Minister Kuantyrov stressed that the accelerated digitalization of business had become one of the consequences of the pandemic. According to the World Economic Forum, in 2020, Internet usage worldwide increased by 30%, and e-commerce grew by more than 20% percent. He noted that the similar situation was in Kazakhstan, where the volume of the e-commerce market had increased from 327 billion tenge in 2019 to more than 1 trillion tenge in 2021. The Minister noted that one of the levers that would help many SMEs to adapt to the new realities was the accelerated implementation of digital solutions in key business processes. The transition to Internet marketing and trade, paperless document management technologies was the most acceptable form of digitalization of the processes based on the mobile Internet, which covered almost 100% of the economically active population of Kazakhstan. The Minister stressed that the automation of public and banking services demonstrated great success in Kazakhstan.

Deputy Chairman of the Supreme Council for Reforms under the President of Kazakhstan Sir Suma Chakrabarti noted in his speech that according to the World Bank, in emerging economies, formal SMEs contributed to up to 40% of GDP. In Asia, according to the Asian Development Bank, SMEs accounted for 96% of businesses and two-thirds of private sector jobs.

He made the following proposals to deepen cooperation among the CICA Member States: promote the use of efficient and sustainable technologies, invest in infrastructure - roads, storage facilities and processing equipment so that farmers could efficiently deliver their products to consumers, facilitate financing for small and medium-sized producers. He noted the need for international cooperation to make trade flows as open as possible, to minimize export bans.

Vice Minister of Digital Development, Innovation and Aerospace Industry of Kazakhstan Askar Zhambakin noted that digital technologies had a positive impact on supply chains, increasing their efficiency and transparency, creating new opportunities for the development of entrepreneurship, including women’s entrepreneurship, reducing restrictions related to distances and competencies, increasing the availability and quality of educational and medical services.

A lot had been done in Kazakhstan in the field of digitalization of public services. In 2019, 80% of public services had been available in electronic form, in 2022 the figure was 94.5%, including 485 services implemented in the E-gov mobile application.

These indicators have pushed Kazakhstan up to the 11th place in the UN ranking on the development of online services and to the 29th place on the e-government development index.

Vice Minister of Trade and Integration of Kazakhstan Asel Zhanassova presented a number of e-products used by the Ministry of Trade and Integration of Kazakhstan: The Integrated Information System for the Protection of Consumer Rights is an online platform where one can access any information about consumer rights, as well as submit claims directly to representatives of a commercial organization; Traderadar is a business guide to sanctions measures, which will help to identify, in a timely manner, the re-export of sanctioned goods and conduct in-depth analysis to take measures to prevent the export/re-export of sanctioned goods, and other innovations.

Pavel Kondrashov, Deputy Chairman of the Board of the CICA Business Council from the Russian Federation, shared his experience in creating an integrated national digital platform focused on user needs – small and medium enterprises.

Fatih Gökyurt, Deputy Chairman of the Board of the CICA Business Council from Türkiye, presented economic reforms of the Turkish Government, which include digitizing government and business services, improving digital skills and reforming the state support system, as well as the Turkish National Small and Medium Enterprises Development Organization that ensures SME digitalization.

Member of the CICA Business Council from China, Chairman of CITIC Construction Co.  Chen Xiaojia spoke about the successful use of smart agriculture for food production in Asia, the most densely-populated region of the world, and expressed the willingness of Chinese food producers to share best practices with their colleagues in the CICA space.

Dr. Chen Dongxiao, President of Shanghai Institutes for International Studies, presented the audience with an extended analysis of the economic situation in Asia and its prospects in the context of the pandemic and other global realities.

The head of the SIIS noted that from a historical perspective a shift in global influence to Asia had been one of the most notable and important features of global economic development over the past thirty years. After nearly seven decades of peacetime development, leading East Asian economies, for example, China, Japan, South Korea, and ASEAN, have all established their full-fledged industrial bases with vigorous regional industrial clusters. He stressed that East Asia is the only region where systematic industrialization had been fully achieved after the Second World War.  Entering the 21st century, a new round of international division of helped to concentrate industrial chains within the region, accelerating the Asianization of global economic growth.  Moreover, economic cooperation and regional integration have proved to be rather resilient against a two-years-old pandemic and rising geopolitical tensions. It was emphasized that the Asian success story tells us that after a century of sea-based industrial civilization, the world may be on the cusp of a real Asian century.

Representatives of the IT industry shared their views and practices in digitizing industries such as tourism, agriculture and transportation corridors, as well as venture financing.  Christopher Campbell-Holt, Registrar and Chief Executive of the AIFC Court, spoke about close cooperation with the government of Kazakhstan to guarantee the protection of foreign investors' rights.

A separate panel session was dedicated to doing business in pandemic and restricted environment, during which Sergey Glazyev, a member of the Board – Minister in charge of Integration and Macroeconomics of the Eurasian Economic Commission, addressed the session online, noting the difficulties of pursuing economic policy under sanctions, and offering tools for ensuring economic environment in Asia that promote sustainable growth under external influences.  Presentations were also made by Director of the Department of the Eurasian Economic Commission Yermek Kuantyrov, Head of the Subregional Office for North and Central Asia of the United Nations Economic and Social Commission for Asia and the Pacific Nikolay Pomoshchnikov, and Director of the Kibbutz Industries Association of Israel Michal Tsoran.

As part of the session on ensuring food security in a changed environment in Asia, Secretary General of the Asian Cooperation Dialogue (ACD) Pornchai Danvivathana briefed participants on ACD activities in ensuring food security and noted the need to strengthen transportation and logistics connectivity on the continent for the timely delivery and movement of goods, people and services.

Joint Secretary of the Ministry of Food of Bangladesh Habibur Rahman Hosaini presented Bangladesh's experience in ensuring food security and made specific proposals to strengthen interaction among the CICA Member States.

Following the Fifth Plenary Session of the Business Council and the Seventh Business Forum, decisions were made to improve the effectiveness of these CICA institutions.

Participants of the CICA Business Council and Business Forum were invited to a panel session as part of the Astana Finance Days, where President of the Republic of Kazakhstan Kassym-Jomart Tokayev delivered his video address. The Kazakh leader stressed that the New Kazakhstan, implementing a set of measures to modernize the economy and civil society, would guarantee investors' rights, freedom of entrepreneurship and promote healthy initiatives to ensure the growth of welfare of the people of Kazakhstan. 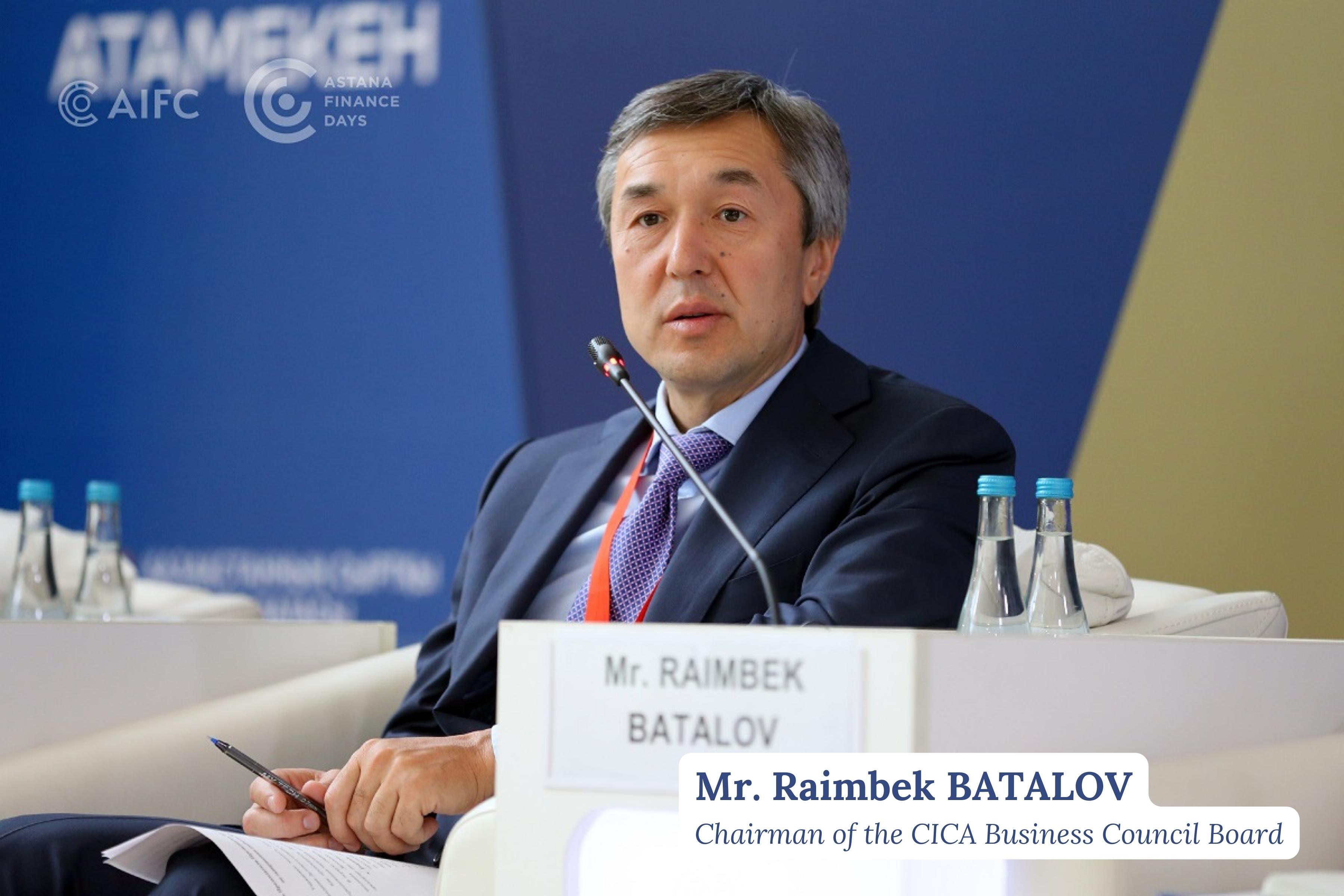 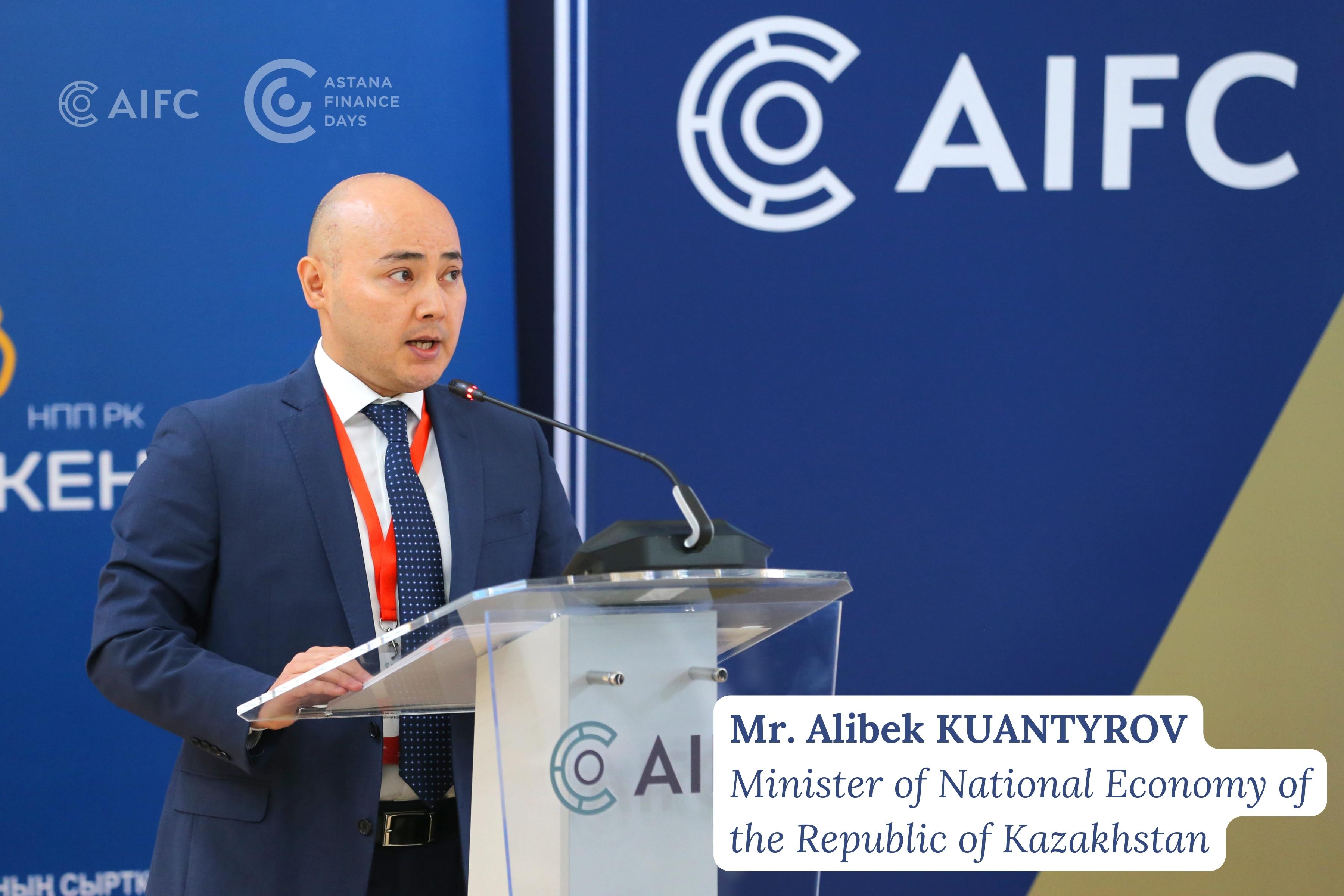 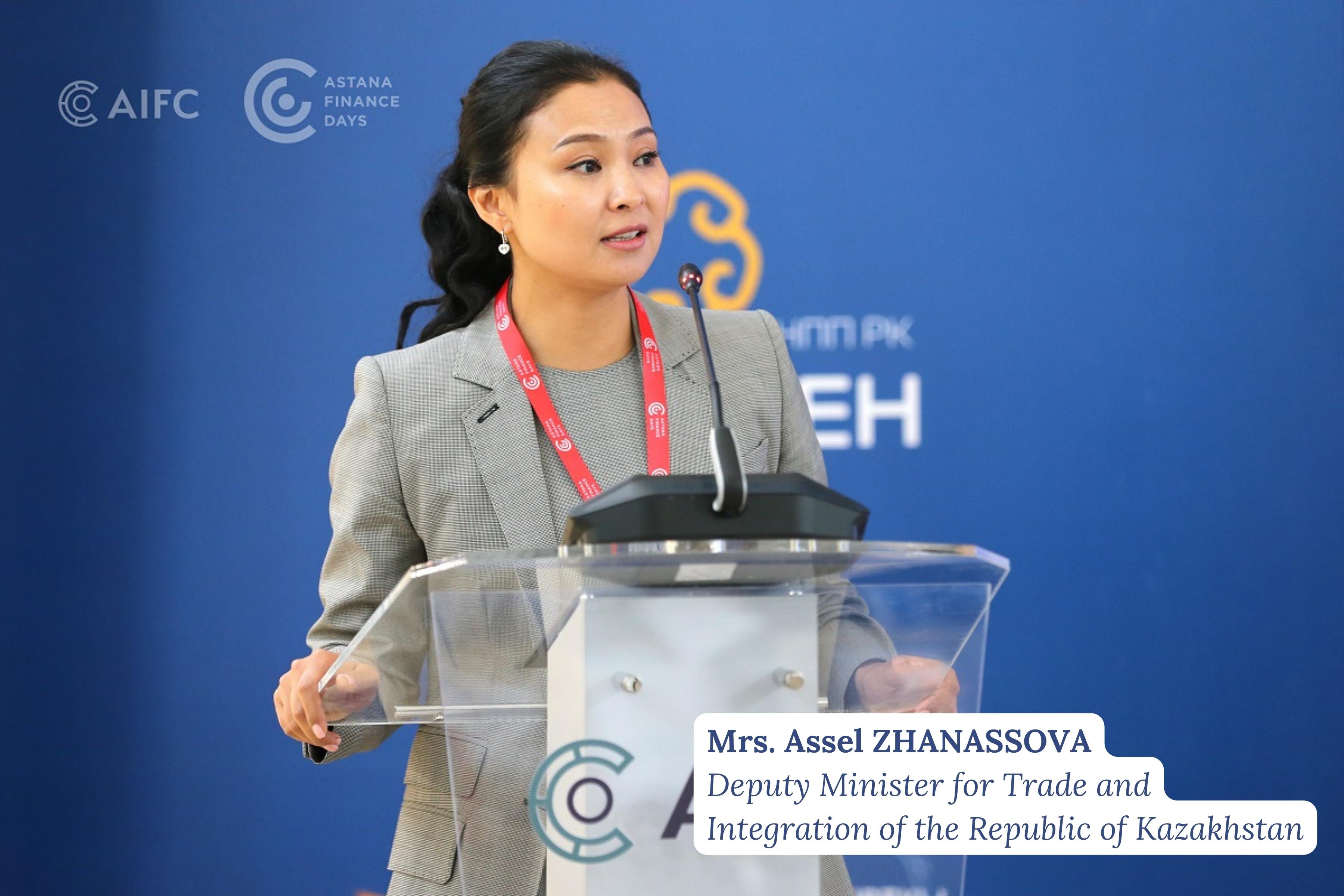 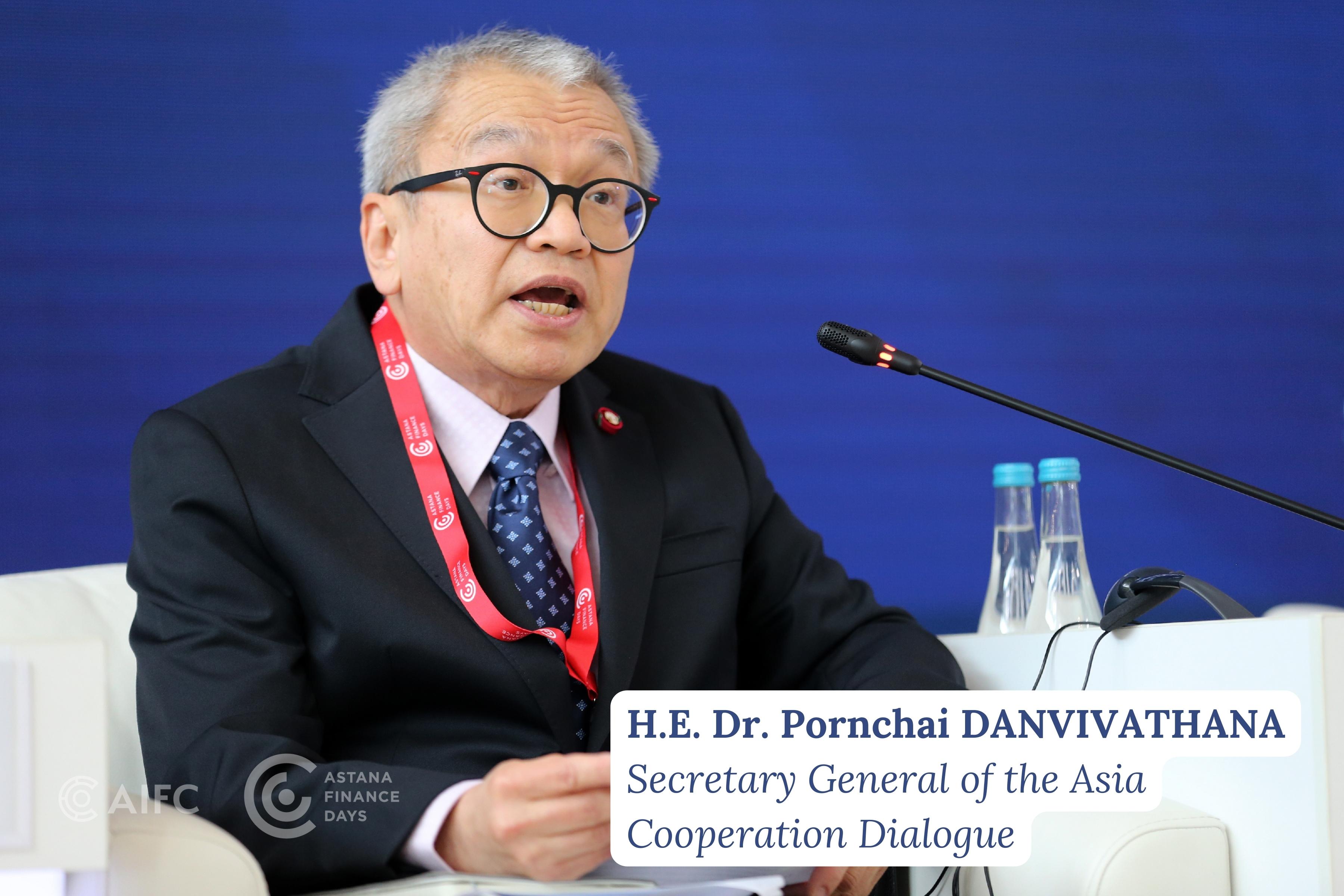 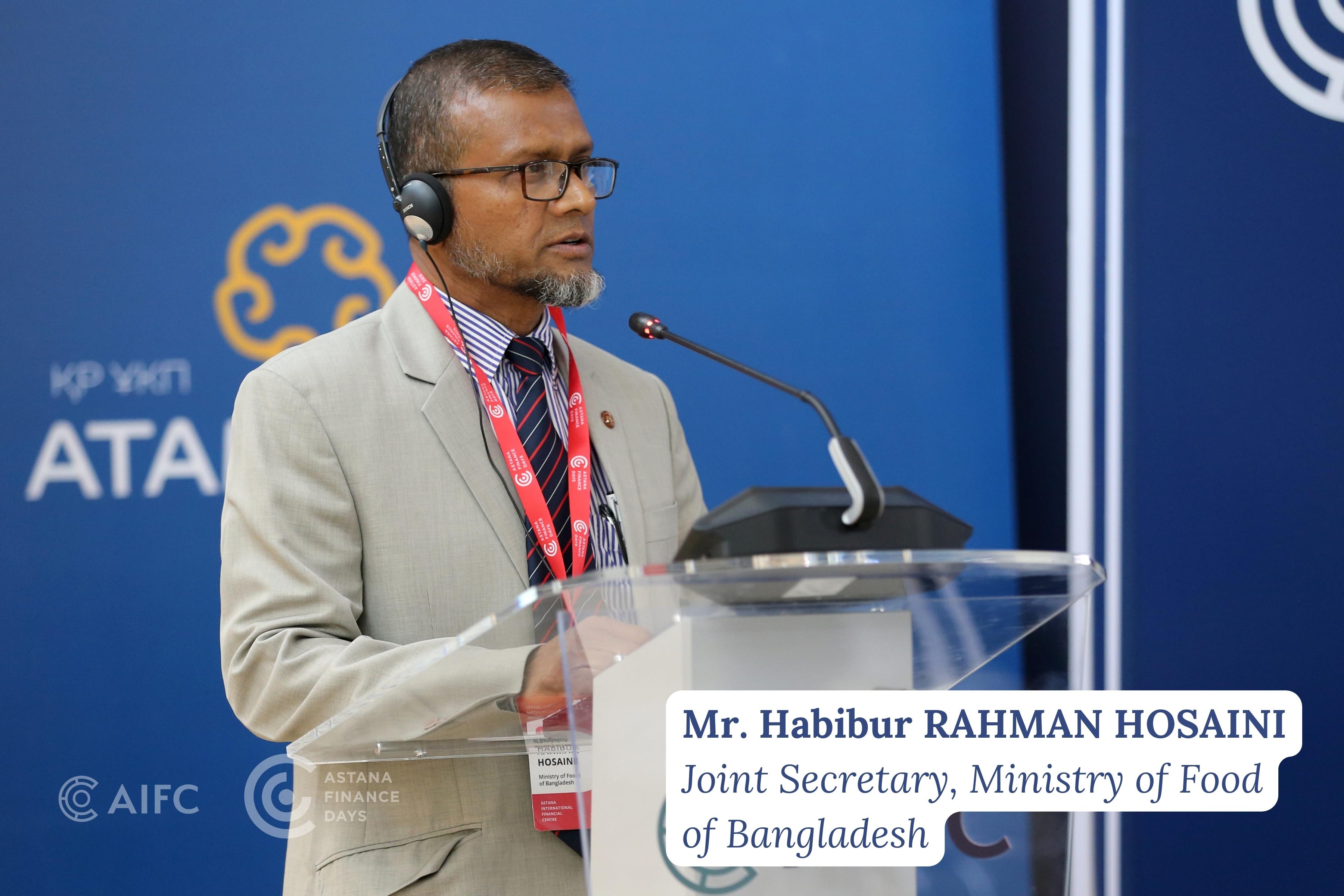 
Mr. Raimbek Batalov, Chairman of the Board of the CICA Business Council