On April 4, 2019, Mr. Kh. Mirzozoda, the Executive Director of the CICA Secretariat, met with Mr. A.N. Borodavkin, the Extraordinary and Plenipotentiary Ambassador of the Russian Federation to the Republic of Kazakhstan. 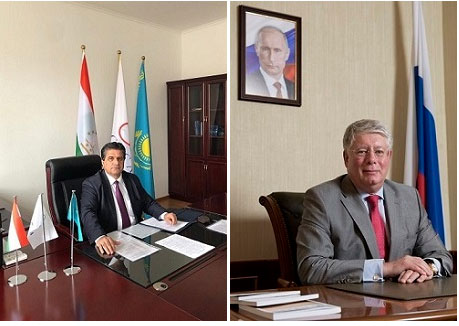 On  April 4, 2019, Mr. Kh. Mirzozoda, the Executive Director of the CICA Secretariat, met with Mr. A.N. Borodavkin, the Extraordinary and Plenipotentiary Ambassador of the Russian Federation to the Republic of Kazakhstan.

During meeting, Kh.Mirzozoda thanked Russia for the active political partnership on the CICA platform, for supporting the Secretariat's initiatives and constructive approach for addressing various issues.

Executive Director expressed the hope that Russia as historic allied state will assist the Tajikistan in security issues during the Fifth CICA Summit (14-15 June 2019, Dushanbe).

A.N. Borodavkin highlighted that CICA is an important Forum that covers huge region from Arab world to Japan and which is capable to contribute in strengthening regional and international cooperation as well as security in the world. Russian Ambassador stated that Moscow always has supported the initiative of creating Conference, proposed by Elbasy - First President of the Republic of Kazakhstan in 1992. Russia expressed its readiness to provide assistance to Tadjik chairmanship in holding the Summit. A.N. Borodavkin also confirmed participation of the Russian Federation in upcoming event at the highest level.

Speaking about the relations between the CICA and Russia, the Russian Ambassador said that he supports the creation of a large Eurasian space, as well as the need to develop diplomacy network for possible cooperation, exchange of experience, and consultations to ensure security in the region.

In the end of the meeting, the parties agreed to continue close cooperation. Kh. Mirzozoda expressed hope that Russia, as the coordinator of the CICA confidence-building measure in the field of economy, will hold thematic events during the period of Tajikistan's chairmanship.